the old part of the building, floor 1

The Department of Radiation Therapy at KOC Ruse conducts radiation therapy of malignant and benign tumors, as well as non-tumor diseases with indications for independent, postoperative, preoperative and combined with chemotherapy radiation therapy. Each radiotherapy observes the principles of good medical practice and the relevant Standards for radiotherapy, confirmed by the Guild of Bulgarian Radiotherapists (HLB). All insured patients are treated in clinical pathways № 246; № 248; № 249; № 250.1; № 250.2; № 251.1; № 251.2; № 252.1

From 2004 to the beginning of 2015 Associate Professor, and later DMN in Medical Radiology at the Department of Imaging and Radiation Therapy at MU-Varna with teaching “Radiation” to students of “Medicine”, “Dental Medicine” and “X-ray technicians”.

From 1987 to 2004 a radiotherapist at the Clinic of Radiotherapy at the University Hospital “Queen Joanna” – ISUL as an assistant, senior assistant and chief assistant with teaching “Radiation” to students of “Medicine” and “Dental Medicine”

XI.2014 Professor of Oncology at SBALOZ – Varna as Head of the Department of Radiation Therapy.

Since September 2016, Professor of Oncology and DMN in Medical Radiology at COC – Ruse EOOD.

1987 – 2004 radiotherapist at the Clinic of Radiotherapy at MHAT “Queen Joanna” – ISUL in the position – assistant, senior assistant and chief assistant with teaching “Radiation” to students of “Medicine” and “Dental Medicine”

In October 2014 after a successful defense competition in SBALO – Sofia he acquired the scientific title “PROFESSOR OF ONCOLOGY”.

In August 2013 acquired the scientific degree DOCTOR OF MEDICAL SCIENCES / DMN after successful defense of a doctoral thesis “Radiation therapy in the complex treatment of primitive neuroectodermal tumors”.

In 2004 she acquired the scientific title of “Associate Professor” in radiotherapy at the Department of Imaging and Radiotherapy / MU-Varna.

In 2000 defended a dissertation for the award of “Doctor of Medicine” on “Radiation therapy after conservative surgery for breast cancer.”

In 2000 acquired a second specialty “Oncology”

From 1975 to 1982 completed MA Sofia with acquired higher education – doctor of medicine.

On the board of editors of the journal Reports of practical Oncology and Radiotherapy; Chinese Journal of Clinicians (International) at the Chinese Medical Association

1999 – Resident doctor in the Department of Radiation Therapy, COC-Ruse EOOD

The team of medical physicists

It is performed for malignant tumors of the breast, gynecological tumors/carcinomas of the cervix, body of the uterus, vagina and vulva /, rectum, bladder, kidney, renal pelvis and ureter, tumors of the head and neck/brain, naso-meso, and hypopharynx, larynx, oral cavity and gums, nasal cavity and sinuses /, skin, testicular tumors/seminoma/, superficial and deep sarcomas, pediatric solid tumors, Hodgkin’s and non-Hodgkin’s lymphomas.

It is performed for malignant tumors of the breast together with targeted therapy, gynecological tumors/carcinomas of the cervix, body of the uterus, rectum, bladder, renal pelvis and ureter, tumors of the head and neck/brain, meso and hypopharynx, larynx, oral cavity, gums, nasal cavity and sinuses.

It is performed in locally advanced carcinomas of the rectum and gynecological carcinomas / of the cervix and uterine body / in adult patients who due to concomitant diseases are not subject to radiation therapy combined with chemotherapy.

It is used with organ-preserving functional effect in initial laryngeal carcinomas of the vocal cords, in skin carcinomas, for palliative purposes in patients with distant metastases for analgesia, decompressive (in metastases with compression of the spinal cord with the risk of paralysis), or in mediastinal syndrome. of Vena Kava /, hemostatic and for tumor reduction / esophageal carcinomas. With analgesic and anti-inflammatory purposes with low radiation doses are successfully treated joint-degenerative diseases such as gonarthrosis, periarthritis humeroscapularis/inflammation in the shoulder /, exostoses/thorns / in the heel, foot, palm, bone panaritium of Dupuytren.

It is mainly used for locally advanced tumors in ENT tumors / in the area of the oral cavity, larynx, nasopharynx, meso and hypopharynx. In the case of laryngeal and hypopharyngeal carcinomas, previously combined radiotherapy requires surgical tracheostomy and cannulation. It is effective in advanced inoperable carcinomas of the rectum, gynecological tumors/cervix, and uterine body /, carcinomas of the urinary tract.

The team of medical physicists performs dosimetric planning of radiotherapy and verification of the radiotherapy plan; develops and implements new high-tech radiotherapy techniques.

Research activity on current national and international scientific topics in cooperation with the other therapeutic and diagnostic departments of COC – Ruse, NOC – Sofia, MU – Sofia, MU – Pleven. Active participation in the meetings of the Guild of Bulgarian Radiotherapists.

Articles and publications in Bulgaria

Under the Operational Program “Regional Development” 2007-2013, co-financed by the European Union through the European Regional Development Fund, after a license from the NRA Series I-81069 with registration number 04436 / 19.06.2014, in KOC-Ruse EOOD was introduced in the operation of a new radiotherapy complex, equipped with high-tech radiotherapy and dosimetric equipment, including a linear accelerator “Electa Synergy Platform” with a virtual computer tomograph “Siemens” for planning radiotherapy. The linear accelerator has the ability to apply all high-tech radiotherapy techniques such as 3D conformal radiotherapy (3DCRT), intensive modulated radiotherapy (IMRT), IMRT by the method of Volumetric Modulated Arch Therapy (VMAT), radiosurgery and hypofractional coronary radiotherapy. The department has a device for telegamma therapy (Terabalt) with capabilities for 3D planning of radiotherapy, as well as a device for superficial X-ray therapy of skin tumors and superficial benign and malignant tumors. 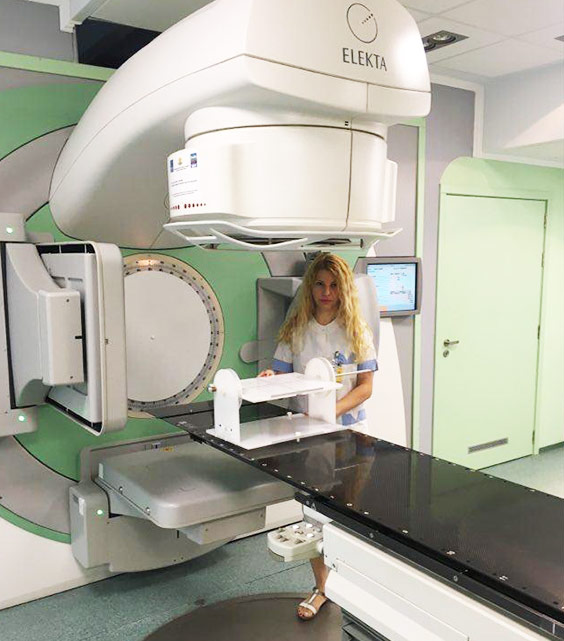 These patients are consulted every working day in the Admissions Office № 24 from 8.00 am to 2.30 pm with the available documentation from another medical institution in the country. After the consultation, at the assessment of radiotherapy, the respective patient is assigned a day and time to appear for radiotherapy in order to prepare for radiotherapy / performing localized CT /. The patient is recorded on the waiting list. If preliminary preparation is needed for the planning of the radiotherapy, it is explained in detail by the nurse in the office.

During the consultation in the polyclinic room №24 the respective radiotherapist will review the medical documentation and the performed imaging examinations (CT, MRI, PET / CT, etc.), will perform a medical examination, if necessary will appoint additional tests, and will assess the possibilities. for radiotherapy (LL), its scheme and dose fractionation. You will be told about the potential risks and benefits of treatment. With your consent for LL, you will be given a date for hospital/inpatient or day hospital/admission and what are the necessary documents that you must carry.

Upon admission to the LL Department, the nurse in к24 will provide you with a series of documents for informed consent. Signing them means that you agree to conduct LL in the relevant clinic and by the relevant staff. A medical history (IL) will be drawn up, which contains important medical information about you and your illness. After the stationary/stay or day stationary/admission, the preparation of the radiotherapy plan is started. For this purpose, it is necessary to perform computed tomography (CT) and/or magnetic resonance imaging (MRI). To accurately center the radiotherapy during the scan on the patient’s skin, markers are outlined that must be preserved throughout the LL period. In LL of tumors in the area of ​​the head and neck, thermoplastic masks are prepared, which are attached to the mass of the scanner and the accelerator, with the help of a special pad for positioning the patient; they are placed while they are slightly warm and elastic, and after they harden they hold the head, neck and shoulder girdle motionless during the radiotherapy. After the localization CT scan, the radiotherapist outlines the normal organs and tissues with the respective radiotherapy volumes, determines the scheme of radiotherapy with the daily and total radiation dose, as well as the number of radiation fractions. In the second stage, dosimetric planning begins with medical physicists, which determines the direction of the beam, the distribution of the radiation dose in the radiotherapy volumes, and in the nearby normal tissues and organs, which are strictly protected by protection built into the head of the device.

Radiotherapy standards approved by GBL and published in the state newspaper

In a case of emergency please call us or come in our center.